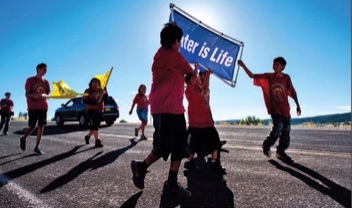 CHURCHROCK — During the 37th annual commemoration Saturday of the largest uranium spill in the United States, a moment of silence was held for the victims of the first U.S. atomic blast, which was not in Japan but in south central New Mexico at the Trinity Site July 16, 1945.

The Tularosa Basin Downwinders Consortium also held a moment of silence at their candlelight vigil Saturday for the victims of United Nuclear Corporation’s release of more than 94 million gallons of uranium wastewater and 1,100 tons of uranium milling waste, which were all highly radioactive, into an arroyo when the corporation’s earthen dam broke July 16, 1979, in the Churchrock area.

The flood of toxic radioactive waste was immediately felt by members of the Red Water Pond Road community, Churchrock and surrounding communities that existed along the arroyo long before the arrival of United Nuclear Corporation.