Categories Menu
Home » MASE in the News » New York Times: Amid Toxic Waste, a Navajo Village Could Lose Its Land 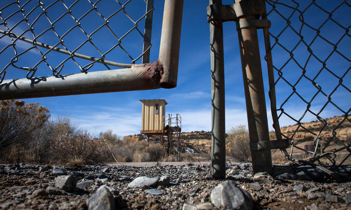 New York Times: Amid Toxic Waste, a Navajo Village Could Lose Its Land 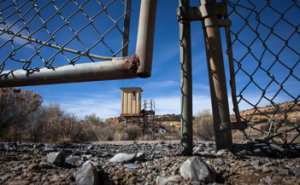 A contaminated pile near the community of Red Water Pond Road holds a million cubic yards of waste from the Old Northeast Church Rock Mine. Mark Holm for The New York Times   CHURCH ROCK, N.M. — In this dusty corner of the Navajo reservation, where seven generations of families have been raised among the arroyos and mesas, Bertha Nez is facing the prospect of having to leave her land forever. The uranium pollution is so bad that it is unsafe for people to live here long term, environmental officials say. Although the uranium mines that once pocked the hillsides were shut down decades ago, mounds of toxic waste are still piled atop the dirt, raising concerns about radioactive dust and runoff. And as cleanup efforts continue, Ms. Nez and dozens of other residents of the Red Water Pond Road community, who have already had to leave their homes at least twice since 2007 because of the contamination, are now facing a more permanent relocation. Although their village represents only a small sliver of the larger Navajo nation, home to nearly 300,000 people, they are bearing the brunt of the environmental problems. “It feels like we are being pushed around,” said Ms. Nez, 67, a retired health care worker, who recalled the weeks and months spent in motel rooms in nearby Gallup as crews hauled away radioactive soil from the community’s backyards and roadsides. 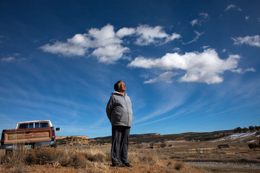 Bertha Nez said families of Red Water Pond Road fear they could be permanently relocated because of the contamination. Mark Holm for The New York Times   “This is where we’re used to being, traditionally, culturally” she said. “Nobody told us it was unsafe. Nobody warned us we would be living all this time with this risk.” These days, this sprawling reservation, about the size of West Virginia, is considered one of the largest uranium-contaminated areas in United States history, according to officials at the Environmental Protection Agency. The agency has been in the throes of an expansive effort to remove waste from around this tiny and remote Navajo village, and clean up more than 500 abandoned mine areas that dot the reservation. Federal officials say they have been amazed at the extent of the uranium contamination on the reservation, a vestige of a burst of mining activity here during the Cold War. In every pocket of Navajo country, tribal members have reported finding mines that the agency did not know existed. In some cases, the mines were discovered only after people fell down old shafts. “It is shocking — it’s all over the reservation,” said Jared Blumenfeld, the E.P.A.’s regional administrator for the Pacific Southwest. “I think everyone, even the Navajos themselves, have been shocked about the number of mines that were both active and abandoned.” Between 2008 and 2012, federal agencies spent $100 million on the cleanup, according to the E.P.A.; an additional $17 million has been spent by energy companies determined to be responsible for some of the waste. But the scope of the problem is worse than anyone had thought. The E.P.A. has said that it could take at least eight years to dispose of a huge pile of uranium mine waste that has sat near Red Water Pond Road since the 1980s — waste that must be removed before the area can finally be free of contamination. “The community is frustrated, I know I’m frustrated — we’d like it to go quickly,” Mr. Blumenfeld said.

But before the latest round of cleanup can begin, an application to remove the waste pile must be submitted to the Nuclear Regulatory Commission, which will then conduct environmental and safety reviews. That process will probably take two years, and there is the possibility that public hearings on the plan could extend the process several more years, said Drew Persinko, a deputy director for the commission. That time frame seems unreasonably long for tribal members, who said that spending so long living away from the reservation has been difficult. So far, the E.P.A. has spent $1 million on temporary housing for residents of Red Water Pond Road; much of that cost will be reimbursed by General Electric, which acquired the old Northeast Church Rock Mine site in 1997, and also its subsidiary company, United Nuclear Corporation, which operated the mine. As in the past, the relocations will be voluntary. Some residents wondered — as they have for years now — if the land will ever really be clean. “Our umbilical cords are buried here, our children’s umbilical cords are buried here. It’s like a homing device,” said Tony Hood, 64, who once worked in the mines and is now a Navajo interpreter for the Indian Medical Center in Gallup. “This is our connection to Mother Earth. We were born here. We will come back here eventually.” Residents still remember seeing livestock drinking from mine runoff, men using mine materials to build their homes and Navajo children playing in contaminated water that ran through the arroyo. Today, the site near Red Water Pond Road holds one million cubic yards of waste from the Northeast Church Rock Mine, making it the largest and most daunting area of contamination on the reservation. “This is our connection to Mother Earth,” said Tony Hood, left. Mark Holm for The New York Times The waste does not pose any immediate health risk, Mr. Blumenfeld said, but there are concerns about radioactive dust being carried by the wind, runoff from rain, and the area’s accessibility to children, who can slip in easily through a fence. Under a plan being developed by General Electric and the E.P.A., the waste would be transported to a former uranium mill just off the reservation — already considered a Superfund site — and stored in a fortified repository. The estimated cost is nearly $45 million. “General Electric and United Nuclear Corporation are committed to continue to work cooperatively with the U.S. government, Navajo Nation, state of New Mexico and local residents to carry out interim cleanups and reach agreement on the remedy for the mine,” said Megan Parker, a spokeswoman for General Electric. The Navajo E.P.A., which is an arm of the tribe’s own government, for years has been calling for a widespread cleanup of abandoned mines. Stephen Etsitty, the executive director of the agency, said he was hopeful that progress was finally being made, but acknowledged that the scope and technical complexity of the operation at Red Water Pond Road was unprecedented. “We’re pushing and doing as much as we can to keep the process going as fast as we can,” Mr. Etsitty said. “It’s just taken so long to get there.” On a recent day, Ms. Nez and several other residents stood on a bluff near a cluster of small homes and traditional Navajo hogan dwellings as the wind whipped across a valley that once bustled with mining activity. The group talked of their grandparents — medicine men who were alive when the mines first opened — and wondered what they would think about Red Water Pond Road today. “They would say ‘How did this happen? They ruined our land,’ ” Ms. Nez said. “ ‘How come you haven’t prayed to have this all fixed up?’ ”