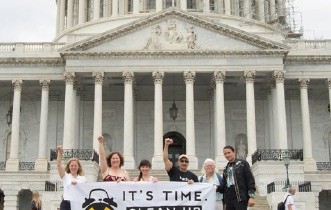 GRANTS — Petuuche Gilbert, a member of the Pueblo of Acoma, will join indigenous activists from the Navajo Nation, Standing Rock Sioux and Oglala Sioux Nation this week in Washington to raise awareness about radiation poisoning in their communities.

The group is scheduled to present a panel discussion Monday at Georgetown University on “The Invisible Killer — Radioactive Pollution in Unsuspected Places.” On Tuesday, they will participate in a protest at EPA headquarters against the U.S. Environmental Protection Agency’s Clean Power Plan and its support for nuclear energy.

Dr. Muhammad Khalid and the Physicians for Social Responsibility’s DC Metro Chapter will host the group for a dinner meeting and presentation Wednesday, the 65th anniversary of the first nuclear detonation at Nevada Test Site.

“These uranium mines cause radioactive contamination and, as a result, all the residents in their vicinity are becoming nuclear radiation victims,” Gilbert said. “A third of these mines are abandoned mines, meaning there is no identified party responsible for cleaning up. All of these old mines emit radioactivity into surface waters, groundwater and air, which then affect all people living in the area — including many indigenous and Hispanic communities.”

“New Mexico and the federal government have provided little funding for widespread cleanup and only occasionally are old mines remediated,” he said. “Meanwhile, people are breathing radioactive air, and using water from aquifers that are being contaminated from old mines and mills.”

Especially affected are residents living next to former uranium mills such as the Homestake/Barrick Gold site, which has been in the cleanup stage for more than 30 years, he said.

“The groundwater has been polluted and this threatens the city of Grants, village of Milan, Bluewater Valley residents, and downstream communities of Acoma Pueblo and Laguna Pueblo who depend on this aquifer.”

Exposure to radioactive pollution has been linked to cancer, genetic defects, Navajo neuropathy and increases in mortality, according to the group.

The delegation is warning of the toxic legacy caused by more than 15,000 abandoned uranium mines nationwide. Indigenous communities have been disproportionately impacted, they said, because 75 percent of the abandoned mines are located on federal and tribal lands.

“Native American nations of North America are the miners’ canaries for the United States, trying to awaken the people of the world to the dangers of radioactive pollution,” Charmaine White Face from Defenders of the Black Hills said.

South Dakota has 272 abandoned uranium mines, which are contaminating waterways such as the Cheyenne River, and desecrating sacred and ceremonial sites. The Navajo Nation has more than 500 unreclaimed uranium mines.

“The United Nuclear Corporation mill tailings spill of 1979 north of Churchrock left an immense amount of radioactive contamination that down-streamers, today, are currently receiving in their drinking water,” Leona Morgan of DinÃ© No Nukes said. “A mostly Navajo community in Sanders, Arizona, has been exposed to twice the legal limit allowable for uranium through their tap. This is criminal!”

Also participating in the delegation are Navajo Nation members Tommy Rock of DinÃ© No Nukes and Klee Benally, an organizer of the Clean Up The Mines! campaign, which is focused on passing the Uranium Exploration and Mining Accountability Act that would ensure cleanup of all abandoned uranium mines. The act was submitted as a draft to Rep. Raúl Grijalva, D-Ariz., two years ago but has yet to be introduced to Congress.

On Jan. 19, a bipartisan group of Colorado lawmakers introduced the Good Samaritan Cleanup of Orphan Mines Act. The draft bill would allow state and local governments and groups to apply for permits to help clean up abandoned mines.