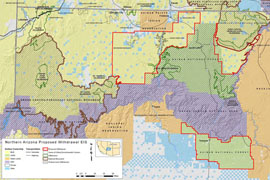 Photo by the Department of the Interior

The Interior Department has extended a ban for six months on new mining claims on more than 1 million acres near the Grand Canyon, outlined in red on this map. Interior is eyeing a 20-year ban on those lands, in addition to cross-hatched areas where mining is already banned. By Matthew Trotter, Cronkite News Link to original story July 12, 2011 WASHINGTON – A proposal to reverse a federal ban on new mining claims near the Grand Canyon survived a committee vote Tuesday and could go to the full House as early as next week. Opponents were unable to strip the language from the Interior-Environment appropriations bill, but not before contentious debate among House Appropriations Committee members about the true impacts of uranium mining near the Grand Canyon. “Let’s not screw up the Grand Canyon,” said Rep. Ed Pastor, D-Phoenix, who asked what would happen to the environment and to the steady flow of tourism dollars if land around the Grand Canyon were industrialized. But Rep. Jeff Flake, R-Mesa, who last week added the language to reverse the federal ban, defended his rider, saying Congress should be making such decisions and not the Secretary of Interior. “The gulf between rhetoric and reality on this is as wide as the Grand Canyon,” Flake said, adding that in more than two years of study, the Interior Department has not been able to come up with a reason to stop uranium mining in the area. Flake’s rider was a response to Interior Secretary Ken Salazar, who last month announced an emergency six-month ban on new mining claims on more than 1 million acres near the Grand Canyon. He was extending a two-year ban that would have expired this month, saying the extra time is needed for Interior to finish analyzing potential impacts of uranium mining in the area. Salazar said at the time that his preferred action once the analysis is complete is a 20-year moratorium. Rep. James Moran, D-Va., urged the committee Tuesday to strike Flake’s rider, saying uranium mining would poison the Colorado River water that millions of Americans rely on and blight the canyon’s scenic landscape. Others argued — for and against the rider — by citing concerns over the level of foreign influence on American uranium mining. Rep. Norm Dicks, D-Wash., said it is mostly foreign companies competing for uranium mining rights in the U.S. Rep. Jo Ann Emerson, R-Mo., echoed his concern and offered a cautionary tale from her home state: Only one beryllium mine in Missouri is under an American company’s control, she said. Several committee Republicans expressed concern about the amount of uranium the U.S. buys from foreign sources, claiming the nation imports about 90 percent of its uranium, mostly from Russia. Opening land near the Grand Canyon to mining was necessary for America’s economy and security, they argued. But Rep. Jesse Jackson Jr., D-Ill., countered that there is a reason the U.S. buys so much Russian uranium. “We buy Russian uranium because it keeps it out of the hands of Iran,” Jackson said. “We buy Russian uranium because it keeps it out of the hands of North Korea.” He said Flake has a “particular interest” in mining going forward. “This is a Flake earmark for the mining industry,” Jackson said, drawing a smirk from Flake, who built a reputation for battling earmarks. “And for companies we can’t even name.” Moran had the last word before the vote on his amendment. “It (the rider) should be struck, we should protect the Grand Canyon, we should leave these decisions to the Secretary of the Interior,” he said. The amendment failed on a 23-26 vote that split mostly on party lines. Three Republicans voted for the amendment: C.W. Bill Young of Florida, Frank Wolf of Virginia and Steven LaTourette of Ohio. Flake called Moran’s amendment an attempt to “go around the deliberative process” in deciding whether to allow new mining claims on more than 1 million acres around the Grand Canyon that contain significant uranium deposits. Until the funding bill wins final approval from the House and Senate, the ban imposed by Salazar remains in effect. A committee staffer said the bill could reach the full House for consideration by next week or it could be delayed until after the House takes its August recess, depending on other business.