Posted on Jul 13, 2021 in MASE in the News, Radiation Exposure Compensation Act 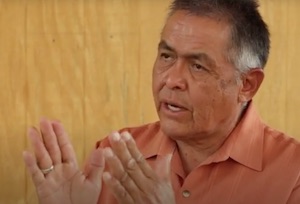 CHURCHROCK – Larry King, president of Churchrock Chapter and a former uranium worker, doesn’t stand a snowball’s chance in the melting Arctic of receiving federal benefits afforded sick Navajos who worked in the uranium industry before 1971. King isn’t the only one.

Linda Evers of Milan, co-founder of the Post-’71 Uranium Workers Committee, and the group’s members also can forget about help with their medical bills unless Congress changes qualifications for the 1990 program.

This weekend, the first day dawned in the countdown to July 10, 2022, when, according to statute, the Radiation Exposure Compensation Act Trust Fund “terminates,” along with the authority of the U.S. Attorney General to administer the law, according to the Department of Justice.

When the sun sets on this program, former uranium workers and downwinders will be unable to apply for benefits.

The Radiation Exposure Compensation Act, “RECA,” provides compassionate payments to workers for certain cancers and diseases resulting from exposure to radiation during the build-up to the Cold War. It also compensates individuals who became ill following exposure to radioactive fallout from nuclear testing in Nevada.

“Our New Mexico congressional delegation must provide leadership to continue and expand the RECA program before it sunsets on July 11, 2022,” King, Evers and Susan Gordon, coordinator for the Multicultural Alliance for a Safe Environment, said in a joint statement.

They called on U.S. Sens. Ben Ray Luján and Martin Heinrich, both D-N.M., to demand an extension of RECA and adoption of amendments that will: extend RECA through 2045; increase compensation for all claimants to $150,000; and expand eligibility to all uranium workers who were active from 1972 to 1990.

King, Evers and Gordon want to see the map of geographical eligibility for downwind compensation redrawn to cover all of New Mexico – including the Trinity Test Site – Arizona, Colorado, Idaho, Montana, Nevada, and Utah.

They also proposed that individuals present in Guam during atmospheric testing in the Pacific, and veterans who participated in the cleanup of Enewetak Atoll, be eligible for compensation.

“Most of the uranium mining production happened after 1971, yet we have been excluded from consideration for RECA compensation,” King said. “There were no safety improvements for miners. We are dying and we deserve medical help and financial compensation for our exposures.”

From 1945 to 1962, the U.S. government conducted hundreds of atmospheric nuclear weapons tests. Uranium mining and processing began in many areas, especially in the western states, to fuel the development of the nuclear arsenal. Individuals living near atmospheric testing sites, workers in uranium mining and processing, and military service members were exposed to radiation.

“The RECA program is very important to the workers that unknowingly gave their lives during the Cold War,” Evers said. “Our own government was and still is responsible for worker safety, and from the early 1940’s right up to today, they still are not protecting uranium workers properly. The government and uranium industry made millions in profits while knowingly killing uranium workers.”