Posted on Jul 14, 2021 in MASE in the News, Radiation Exposure Compensation Act 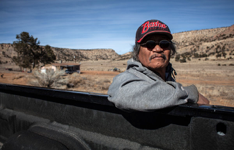 A warning sign at the old Kerr-McGee uranium mill site is shown on open land in the foreground with Mount Taylor in the background near Grants, N.M. (Susan Montoya Bryan/Associated Press)

This time next July we are going to lose a key federal program, and you hardly even hear about it. The Radiation Exposure Compensation Act (RECA) will come to an end on July 11, 2022. We need our elected representatives in Congress to extend and expand that program before it runs out.

Congress first passed RECA in 1990. The idea was to help cover health costs for many of the communities exposed to nuclear radiation through U.S. nuclear weapons programs. Those programs began in the 1940s, most notably here in New Mexico with the first nuclear test in 1945. Above-ground nuclear tests would continue until 1962, and to support the thousands of new nuclear weapons being built an expansive uranium mining and processing program began in our state and elsewhere.

RECA provides a one-time benefit payment to people who have likely developed cancer or other specified diseases after exposure to radiation from this nuclear project. That exposure could have come through uranium mining, milling or transport, or from radioactive fallout from atomic weapons testing in certain areas of Utah, Nevada and Arizona.

The program was expanded by law in 2000. Now it offers compensation to some additional groups of uranium workers and civilians who were also exposed to radiation. But not everyone. Uranium workers after 1971 were not included.

Most of the uranium mining production happened after 1971, yet most uranium workers have been excluded from RECA. There were no safety improvements for miners.

We need New Mexico’s congressional representatives and Sens. (Ben Ray) Luján and (Martin) Heinrich to end that arbitrary distinction and extend the program so everyone can benefit from it. Broadly this looks like:

We cannot roll back the clock on what happened. But we can prevent it from happening again and take care of those who were most affected. If we don’t, we are dishonoring their sacrifices and abandoning them.