PRESS RELEASE: No Uranium Mining in Churchrock, New Mexico Until Legacy Waste Is Cleaned Up 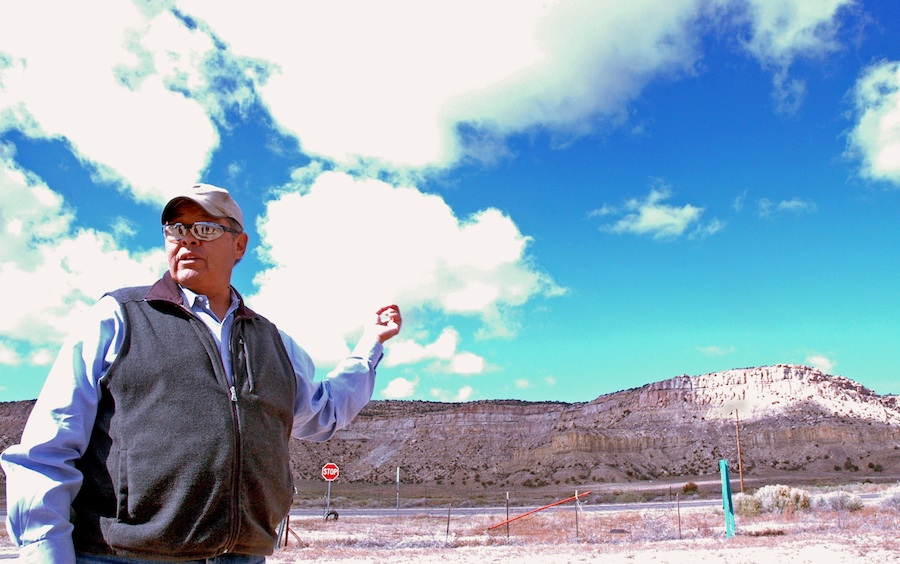 Larry J. King, ENDAUM Board member, stands at his gate and points out the area of in Churchrock, NM known as Section 8 where Hydro Resources (a subsidiary of Uranium Resources Inc.) plans to mine uranium using in situ leach methods.
Photo by Leona Morgan

NO URANIUM MINING IN CHURCHROCK, NEW MEXICO UNTIL LEGACY WASTE IS CLEANED UP

CHURCHROCK, N.M. — On July 19, 2012, the uranium mining company Hydro Resources Inc. signed an agreement with the Navajo Nation giving the mining company limited access across Navajo Indian Country to its Churchrock Section 8 mine site. The agreement specifically states that Hydro Resources (a subsidiary of Uranium Resources Inc.) cannot begin mining uranium until legacy waste at Section 8 and adjacent Section 17 has been cleaned up. Hydro Resources announced its intention to mine uranium on Section 8 and Section 17 in 1994. Community members organized themselves as the Eastern Navajo Diné Against Uranium Mining (ENDAUM) and sought the help of the nonprofit law firm New Mexico Environmental Law Center to keep irresponsible uranium mining from returning to Navajo lands. ENDAUM has kept the fight going for over a decade and Hydro Resources has yet to break ground. ENDAUM’s mission is to ensure that the water, air, land and community health are protected. Leona Morgan, ENDAUM Coordinator explains, “ENDAUM believes it is our right as Indigenous Peoples to preserve our traditional and cultural Diné resources that may be affected if uranium mining is allowed anywhere within the Four Sacred Mountains or on other Indigenous Peoples’ homelands. ENDAUM and our allies will continue to fight for the right to safe drinking water supplies for all life, for all our relations and future generations,” says Morgan. “Hydro Resources’ parent company, Uranium Resources Inc., is struggling to pay for clean-up at its uranium operations in Texas,” says Eric Jantz, attorney for ENDAUM. “We’re skeptical that Hydro Resources will be able to pay for clean-up at Church Rock. In any event, ENDAUM and the people of Church Rock will be watching Hydro Resources and the Navajo Nation to ensure that their land and families are protected.” The Navajo Nation fined Hydro Resources for trespass earlier this year when the company crossed tribal trust land in order to access its property on Section 8. The agreement was made to allow Hydro Resources limited access to Section 8 and require that Hydro Resources submit to Navajo Nation jurisdiction for its operations in Indian Country as well as clean up the radioactive waste on its property before any new mining commences. “The Navajo Nation doesn’t currently have clean-up regulations under its Superfund law — those regulations will have to be written,” says Morgan. “ENDAUM will be engaged in this process to ensure that the highest clean-up standards are adopted to protect the community.”

Interviews and Images Available Upon Request