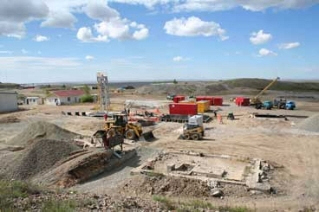 Uranium Resources (URI’s), a uranium exploration, development and production company, announced today that the United States Court of Appeals for the Tenth Circuit en banc held today that the Company’s Section 8 property in Churchrock, New Mexico is not Indian Country.

Don Ewigleben, President and CEO of Uranium Resources noted, “This ruling enables us to immediately seek to renew the underground injection control (UIC) permit that we had been granted by the State of New Mexico in 1989. This is the last permit required for us to advance our in situ recovery uranium mining project on our Churchrock property where we hold 13.7 million pounds of in place mineralized uranium material.”

The result of the ruling means the authority to issue a UIC permit to URI falls under the jurisdiction of the State of New Mexico, and not the U.S. Environmental Protection Agency (USEPA). The jurisdictional dispute originated among the State of New Mexico, the USEPA and the Navajo Nation and was initially taken to the Tenth Circuit Court of Appeals. In January 2000, the issue was remanded to the USEPA. In February 2007, the USEPA reached a decision that Section 8 is Indian country, and therefore under its jurisdiction to administer the UIC permit. URI appealed the decision to the Tenth Circuit Court in April 2009. By a 2-1 decision the court upheld the EPA’s ruling. In August 2009, URI’s petition for an en banc review was granted and oral arguments were held January 2010. The subject ruling that the Section 8 property is not Indian Country is the result of the en banc review.

“URI will continue to hold discussions with concerned stakeholders including members of the Navajo Nation, but the court’s decision allows us to move forward,” commented Mr. Ewigleben.

In March 2010, the Tenth Court upheld URI’s NRC license to conduct in situ recovery (ISR) uranium mining in McKinley County, the only such license in the state of New Mexico. That license allows for the production of up to 1 million pounds per year from Churchrock until a successful commercial demonstration of restoration is made, after which mining on other properties can begin and the quantity of production can be increased to 3 million pounds per year.

URI has been conducting prospective employee workshops to begin recruitment for a variety of jobs from production to administration. “We have been encouraged by the level of interest and support URI is receiving in the Grants Mineral Belt, people are looking for jobs and we want to provide that need,” concluded Ewigleben.

The opposing parties have the right to petition the Supreme Court for review within 90 days.

Uranium Resources Inc. explores for, develops and mines uranium. Since its incorporation in 1977, URI has produced over 8 million pounds of uranium by in-situ recovery (ISR) methods in the state of Texas where the Company currently has ISR mining projects. URI also has 183,000 acres of uranium mineral holdings and 101.4 million pounds of in-place mineralized uranium material in New Mexico and a NRC license to produce up to 1 million pounds of uranium per year. The Company acquired these properties over the past 20 years along with an extensive information database of historic mining logs and analysis. None of URI’s properties is currently in production.

URI’s strategy is to fully exploit its resource base in New Mexico and Texas, expand its asset base both within and outside of New Mexico and Texas, partner with larger mining companies that have undeveloped uranium or with junior mining companies that do not have the mining experience of URI, as well as provide restoration expertise to those that require the capability or lack the proficiency.

The In the Heart of the Wild Flame CD is well crafted and evocative. The album includes a pamphlet with all the words, English translations of Spanish and Navajo, and explanations and meanings of the instrumentals. Click here to purchase

Pipeline contractors have already been charged with sex trafficking. How many of our women must suffer? How many must go missing before someone takes action?