Posted on Mar 24, 2017 in International Uranium Issues, MASE in the News 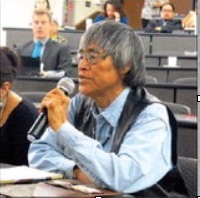 ALBUQUERQUE — The concept of “free, prior and informed consent” referred to in the U.N. Declaration on the Rights of Indigenous Peoples is basically not worth the paper it’s written on when it comes to energy development on tribal lands, according to testimonies presented last week to U.N. Special Rapporteur Victoria Tauli-Corpuz.

Tauli-Corpuz and her associate Hee-Kyong Yoo listened for hours as presenters pointed to examples where “meaningful consultation” between the United States and tribal governments was sadly lacking. The regional indigenous consultation, hosted Feb. 25 by the University of New Mexico School of Law, was part of a series of U.S. consultations examining the situation of indigenous people related to energy development.

“The special rapporteur’s topic is a timely and encouraging reminder that the human rights of indigenous peoples within the United States are subject to international scrutiny,” Christine Zuni Cruz, assistant dean at the UNM School of Law, said.

MULTICULTURAL ALLIANCE FOR A SAFE ENVIRONMENT (MASE) updated their status.

When this happens, it's usually because the owner only shared it with a small group of people, changed who can see it or it's been deleted.
View on Facebook
·Share